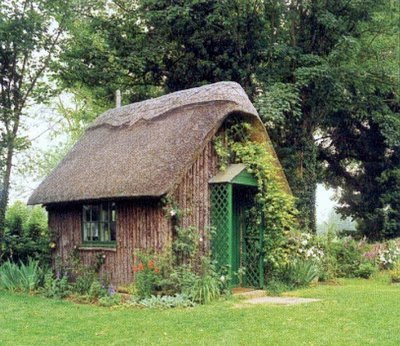 And she had her cozy thatched roof hut in the woods, where she sat spinning straw into gold, and tended her garden and her goats and her sheep, and the flowers bloomed and smiled as the glinting water in the fountains leapt all around her, and the sun was shining and the moon was still and even in the starlight, all was well in the world. 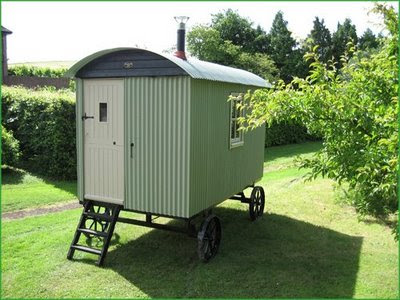 Why choose a Plankbridge shepherd’s hut?
Plankbridge bespoke shepherds’ huts are a traditional, insulated and mobile design for contemporary uses such as a home office, studio, bolthole, music or garden room. A shepherd’s hut will provide you with a warm, dry and relatively soundproof space for use throughout the year.

It is far more than a summer house, yet less than an extension! (more) See beautiful interior and exterior photos!
Posted by Catherine Todd at 10/31/2008 02:44:00 PM No comments: 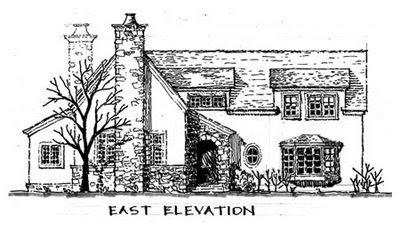 Our cottage kits Are HERE!

Eric Drivdahl at Gelotte Hommas Architecture designed a green, passive solar, prefab SIPs home with a nod to beloved 200 year old cottages yet built for the next 200 years.

Please contact us for more details and to purchase a house kit. 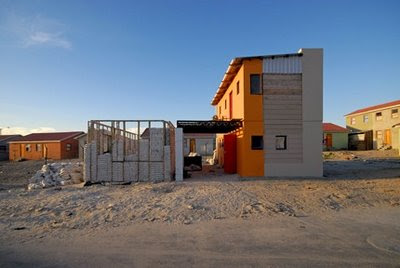 We wrote earlier about Luyanda Mpahlwa and his Sandbag Houses by MMA Architects; it was one of the entries in a competition teaming South African architects with international designers to pioneer new affordable housing systems. MMA went it alone, and built an affordable structure that "requires no tools or advanced construction knowledge and can be built for slightly more than $6,000." Now they have won the Curry Stone Award of $100,000, which honours "innovative achievements in humanitarian architecture and design." 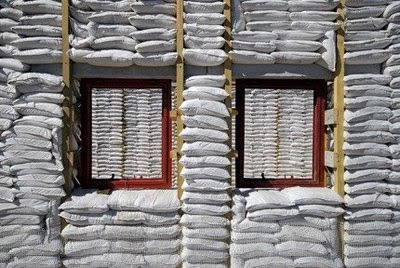 The building system uses a wood frame to define the form of the house, infilled with bags of sand to give it solidity and thermal mass. The are called "Eco-beams." 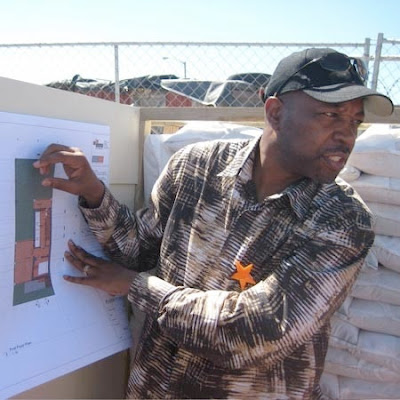 To call MMA unconventional could be considered an understatement. As one of only a handful of black firms in the country, they have long struggled to get work. “Old prejudices die hard,” Mphahlwa said. “Some people take one look at me and do not believe I can build them a house.” The firm took a number of government commissions out of a sense of civic pride and duty but also because they had little choice. Thanks to the success of those projects, including embassies in Berlin and Adis Ababa, they have been able to afford more humanitarian work.

As a testament to MMA’s commitment to that work, when asked what he would do with his share of the money, Mpahlwa said he would probably buy a few more 10X10 houses and send some underprivileged kids to architecture school. On top of the two he has already sent." via Philip Proefrock at Green Building Elements 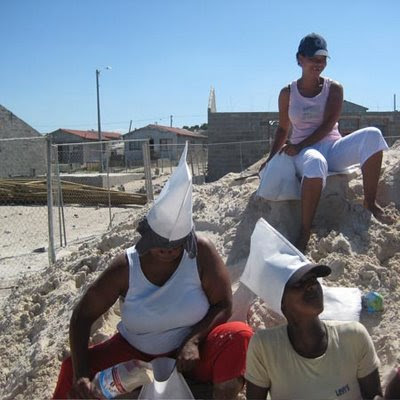 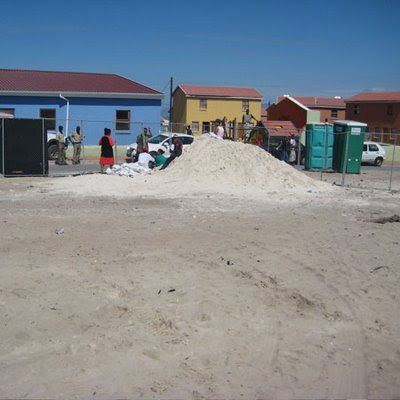 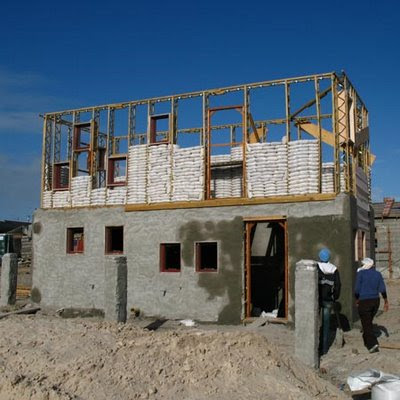 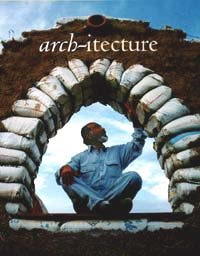 Cal-Earth - (The California Institute of Earth Art and Architecture)
Founded and directed by the internationally renowned architect and author Nader Khalili in 1986, it's scope spans technical innovations published by NASA ...
www.calearth.org/

Nader Khalili is an architect, author, teacher, and innovator of Geltaftan firing of ceramic houses and Superadobe Superblock technology.
www.calearth.org/khalili.htm

Amazon.com: Ceramic Houses and Earth Architecture: How to build, step by step, an adobe and ceramic architecture that is .... In particular, the details of firing a house into its ceramic status is not only ...

Earth Construction House Building Books & Videos: The Rammed Earth House is an eye-opening example of how the most dramatic ... Nader Khalili's ideas on ceramic houses and earth architecture... 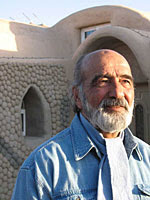 Nader Khalili, an Earth Architect and teacher known for his innovative work with adobe, died on March 5 of congestive heart failure. He was 72 years old. Among his best-known inventions is the “super adobe” Earthbag construction system. He developed it during the early 1980s in response to a call for designs for human settlements on the Moon and Mars by the National Aeronautics and Space Administration. The system consists of oblong plastic bags that are filled with dirt and then laid in circular courses, like the blocks of an igloo, and held in place by barbed wire. When covered in stucco, the bags create form a permanent shelter.

Khalili championed Earthbag houses—which cost as little as $500—as an affordable solution for poverty stricken areas in Africa, India, and South America. He received special recognition from the United Nations for his “Housing for the Homeless” proposal in 1987 and his prototypes were recognized with the Aga Khan Award for Architecture in 2004. Khalili also invented the Geltaftan Earth-and-Fire system. Most adobe houses are unable to withstand earthquakes and strong winds, so Kahlili imagined a fired-adobe structure—dubbed the “ceramic house”—that could resist these elements. 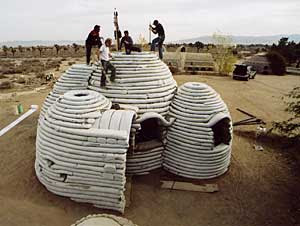 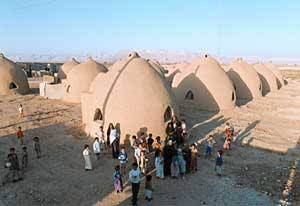 Nader Khalili (top) designed the Earthbag shelter (middle), which was recognized with the Aga Khan Award for Architecture in 2004. When these sandbags are covered with wire mesh and stucco, they become low-cost permanent housing (above).
Posted by Catherine Todd at 10/10/2008 08:00:00 AM 1 comment:

Florida’s first Earthship is being built in Manatee County. Designed to be in harmony with the environment and entirely self sufficient, this sustainable structure uses recycled and indigenous materials, generates its own electricity and processes its own waste with NO impact on the environment.

An Earthship is considered an Earthen home. An Earthen home is a house made of materials from around the build site, dirt mainly.

This building technique is as old as human history, but exactly suitable for today's resource-conscious and environmentally friendly building needs. Trees may be getting a bit scarce these days, but there's no shortage of dirt, the main component of earthen homes.

Earth is the ultimate form of "green" building construction, creating no environmental pollution and consuming virtually no energy.

FACT: There are 6 billion people on the planet and 3 billion of them live in Earthen structures and homes.

The science behind this low-tech construction process is fascinating and we want to share it with you.


LISTEN NOW to a podcast about this project!

Earthships are made out of recycled materials, such as tires and soda cans.
*

Earthships catch water from the sky and use it up to four times.
*

Water is heated from either the sun or by natural gas, but they can have city/county water as a backup water supply.
*

Earthships produce their own electricity, but can have multiple energy sources such as solar and wind-generated energy. The energy is stored in batteries and supplied to electrical outlets in the home.
*

Earthships contain and reuse all household sewage in indoor and outdoor treatment cells. The waste is used for food production and in landscaping.
*

Earthship toilets flush with greywater that does not smell.
*

Because of the way they’re built, Earthships maintain comfortable temperatures in any climate.

A Word from Our Contractor...

Some of you may know already, but I have been commissioned to build an Earthship, the first one of its kind here in Florida. There are Earthships in nearly every state in the US and many in other countries around the globe, but Florida's strict building code has apparently kept other contractors from putting one up here in the sunshine state. I have spent the last month working with an engineer and with Michael Reynolds to take a set of plans from Earthship Biotecture and provide enough detail to begin the approval process for Florida.

An Earthship is basically a self-contained home; it isn't a dependent structure like a traditional house would be, there are no wires or pipes bringing in outside utilities (off-the-grid). The home has a very slight environmental footprint; it isn't a burden on its surroundings, it works in harmony with the environment. The home is constructed of many recycled materials; things that are normally discarded and taking up space in a landfill. The outside walls are made of used tires pounded full of compacted earth; bottles and cans become "bricks" in the other walls and parapets. The roof of the structure is designed to capture rainwater and channel it into cisterns for storage and ultimately for use inside the home. It is pumped through a series of filters depending on its end use. The greywater that comes from sinks, tubs, washing machines and the likes is directed into a botanical cell in the solarium of the home, this is basically a constructed wetlands with gravel, peat moss, and plants that not only clean the water, but also use the nutrients in it to provide oxygen for the air and food and foliage for the inhabitants of the Earthship. After the water passes through the botanical cell, it is picked up and reused to flush the toilets. Blackwater coming out of the toilets goes into a solar septic tank which accelerates the anaerobic process by heating up the waste material with solar energy using the same principals as a solar oven. The broken-down solids are basically inert and free of human pathogens; the solids are then washed through with liquid waste. This mixture passes through yet another biological filter outside being cleaned by the plants before returning to the earth. The water captured from the roof is used three times before it is returned clean; much different than a traditional house!

The home uses only solar for its electrical needs, therefore it is necessary to make the home as energy-efficient as possible so as not to waste any of the precious energy that is captured by the photovoltaic cells. The building is positioned on the lot and is constructed in a manner to take maximum advantage of passive solar opportunities; this significantly reduces the need for external heating and cooling. The home itself is made of 3' thick earthen walls (remember the tires pounded full of earth) outside these walls, the earth is bermed up providing even more thermal mass, this produces a sort of underground effect for heating and cooling. The earth maintains a pretty constant temperature below the surface, using this principal there will be a series of pipes buried underground running into the home; operable skylights in the roof sections of the house will allow hot air to escape, drawing air in through the underground pipes where it will be cooled by the earth before entering the home...air conditioning without electricity or CFCs!!! In addition to this temperature conditioning method, the home will use very efficient L.E.D. lighting throughout the home; Led’s not only use very little energy to produce light, but they also last a very long time reducing the need to replace light bulbs. The home will use energy-efficient D.C. appliances where possible.

In Michael Reynolds assessment, an Earthship is a contained vessel that has everything you need to survive within itself, food, shelter, water, and energy.

We have decided that this build is important to get people talking and coming up with solutions to the problems we are facing today: rising energy costs and shortages, food shortages which are being exacerbated by the diversion of food crops to energy production, and an increasingly polluted environment. To that end, we are opening up this build to people who are interested in learning more about the systems that go into making such a home work, and to those who just want to get some hands-on experience building an Earthship.

I am excited as we move ahead on this project and look forward to working with a group of interested individuals.