How do I build something to live in, of lasting beauty and excellent craftsmanship, here in Guatemala with little money and no expertise? How to build the Gothic Architecture & Cloister Monasteries I have been waiting to build all my life. This photo makes me "catch my breath" every single time. This "illusion of light" drew me to Paris and Sainte Chappelle kept me there for five years...

People built with no money and the "dirt beneath their feet" for thousands of years since the beginning of time and human existance. We build our little "bird nests" with whatever materials we have at hand, no matter what part of the world we are from. They built with the trees in the forests, or the mud from the river, or stone from the mountain, or sand from the desert; whatever materials they literally had "at hand." The earth beneath their feet.

Why should I be so different?

It took more than 100 years to build the spectacular Gothic churches and monasteries; three generations of laborers who could not read or write, with one architect who knew Geometry, Trigonometry and more. It is these unsung workers are the "heroes of the ages" in my book. 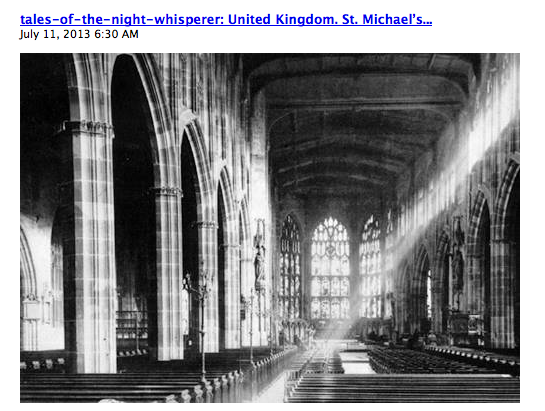 More Images found on an excellent blog:
architectonice
"This is a blog specifically for Gothic and Neo-Gothic architecture."
Many fine examples: http://www.tumblr.com/tagged/gothic-architecture

Which led me to the wonderful examples found here:
http://www.victorianweb.org/art/architecture/gothic/decorated.html 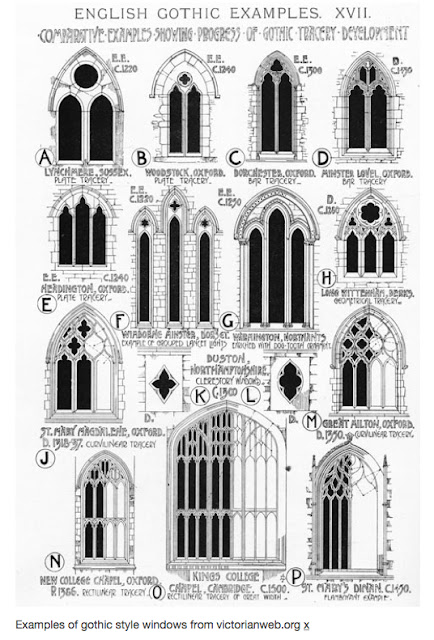 Comparative examples showing progress of gothic tracery development.
The proportions of height to width are less lofty than in the Early English period. Windows are large, and divided by mullions into two or more lights. Tracery at first consisted of geometric forms, as in the cloisters of Salisbury, the choir clerestories of Ely, Lincoln, and Lichfield, and the nave of York. In the latter part of the period it was flowing in character as in the choirs of Ely and Wells. The cusps, which in the Early English style were often planted on, in this period were cut out of the stone forming the tracery. Doorways are ornamented with engaged shafts, and have jambs of less depth than in the Early English style. Arches were formed by being struck from the points of equilateral triangles, or even of lower proportion (No. 299 i). The ogee arch (No. 299 v) was also used. The enlargement of clerestory windows proceeded pari passu with the diminution in height of the triforium (No. 137 F).

Fletcher, Banister, and Banister F. Fletcher. A History of Architecture on the Comparative Method for the Student, Craftsman, and Amateur. 5th ed. London: B. T. Batsford, 1905. Pp. 341-49.
more: http://www.victorianweb.org/art/architecture/gothic/decorated.html

The Victorian Web.org:  This scholarly and educational website, which more than two dozen organizations have honored, contains 55,000 documents — some entire book chapters — on Victorian art, architecture, and design, economics, gender matters, literature, political and social history, religion, and science and technology. Leading publishers send books to the site to be reviewed, and major museums and galleries have shared thousands of images and related material with us. The University of Computense Madrid has thus far translated several thousand documents into Spanish, and a French group has begun translating the Ruskin section. [a Landow.com project]

Credits: Who Created The Victorian Web?

George P. Landow, Professor of English and the History of Art, Brown University

www.landow.com/‎
Victorian Web. This scholarly and educational website, which more than two dozen organizations have honored, contains 55,000 documents — some entire ...

en.wikipedia.org/wiki/George_Landow_(professor)‎
George P. Landow is Professor of English and Art History at Brown University. He is a leading authority on Victorian literature, art, and culture, as well as a ... 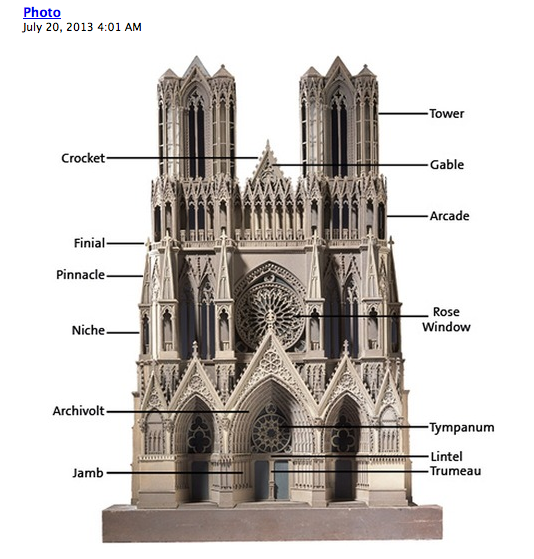 en.wikipedia.org/wiki/Tympanum_(architecture)‎
In architecture, a tympanum (plural, tympana) is the semi-circular or triangular decorative wall surface over an entrance, bounded by a lintel and arch. It often ...


The Decorated Style - The Victorian Web


The Decorated Style, also known as the Geometrical and Curvilinear, Middle Pointed, Edwardian, Later Plantagenet, or Fourteenth-Century Style, comprises the reigns of Edward II (1307-27, Edward III (1327-77). The general appearance, although there is an increasing rich- ness of ornamentation, is simple, from the small number of parts, and magnificent, from the size of the windows filled in with geometrical and flowing tracery; Clerestories were enlarged at the expense of the triforium. Vaulting ribs were more numerous and complex than in the previous style, the vault becoming a main feature in the effect of the interiors.

Left: Spire with Parapet Angle Turrets & Crockets, Salisbury Cathedral.
Right: Spire on Octagonal Tower; Diagonal Buttresses, St. Mary Bloxam, Oxfordshire. [Click on the thumbnails for larger images.]
The new plans were set out with a wider spacing in the bays, more noticeable in parish churches than in cathedrals already started in earlier periods. The progress of vaulting regulated the planning of the piers, and was in itself strongly influenced by the increased size of the openings required to exhibit stained glass. In domestic architecture the "Hall" was highly developed, as at Westminster and Penshurst. Several of the great central towers were now carried up, as Salisbury, Lincoln, and Lichfield.

Where I was able to order this book on Amazon! It seems to be from the early 1900's, and has the famous drawing of the different types of church windows:

Fletcher, Banister, and Banister F. Fletcher. A History of Architecture on the Comparative Method for the Student, Craftsman, and Amateur. 5th ed. London: B. T. Batsford, 1905.

You can also purchase a new copy and download a "free scanned copy" if you pay for a reprint here:

A History of Architecture: On the Comparative Method for Students, Craftsmen, & Amateurs (Hardcover)

(re-) Publication Date: May 10, 2012
This historic book may have numerous typos and missing text. Purchasers can download a free scanned copy of the original book (without typos) from the publisher. Not indexed. Not illustrated. 1901 Excerpt: ... plan (No. 131) and dimensions with that of Amiens (No. 120). Strasburg Cathedral (1240-1365) has two western towers (No. 115 E), a large rose window at west end, and double tracery in the windows i.e., tracery in two planes). The open work tracery spire dates from 1429. The character of the detail is somewhat "wiry." The cathedral was built by "A great master of his craft, Erwin von Steinbach; but not he alone, For many generations labour'd with him. Children that came to see these saints in stone. As day by day out of the blocks they rose, Grew old and died, and still the work went on, And on and on and is not yet completed..... The architect Built his great heart into these sculptured stones, And with him toiled his children, and their lives Were builded with his own into the walls As offerings to God."--Longfellow. Ratisbon Cathedral (1275-1534) (No. 132), the open spires added in 1859-1869, has a regular plan, octagonal apse without ambulatory, and western towers. Notice the peculiar little triangular porch. Ulm Cathedral is notable for the small ratio of support in regard to its floor space. It has a polygonal eastern apse without ambulatory. It is spacious and lofty; only one western tower is carried up. It has an arcaded gallery to the eaves, a remnant ...
\
fromRomanesque traditions, and fine choir stalls. St. Elizabeth, Marburg (1235-1283) (No. 133), is the typical form, known as the "Hall Church." The result of raising the side aisles, as shown, was to abolish the triforium and clerestory, to reduce the importance of the nave, and to do away with the necessity for flying buttresses, while rendering the interior more spacious. Munich Cathedral, St. Barbara, Kuttenberg, and St. Martin, Landshut (1404), are other examples of... 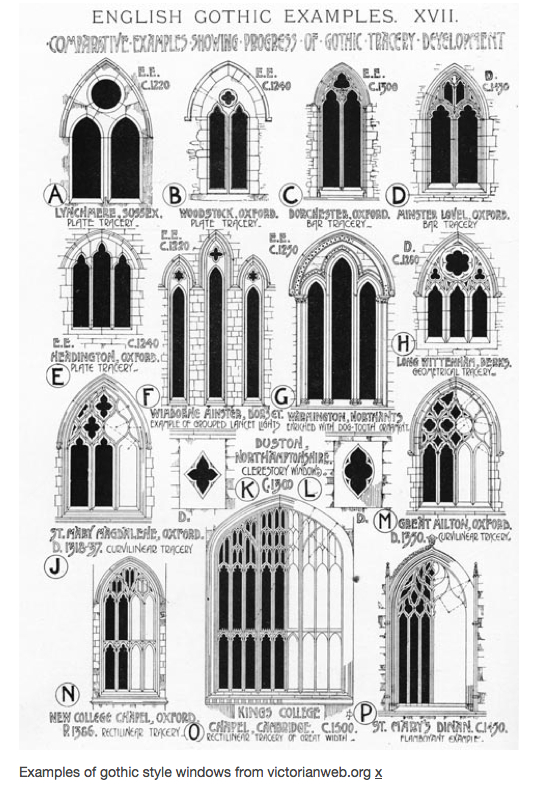 Glossary of Medieval Art and Architecture:tympanum 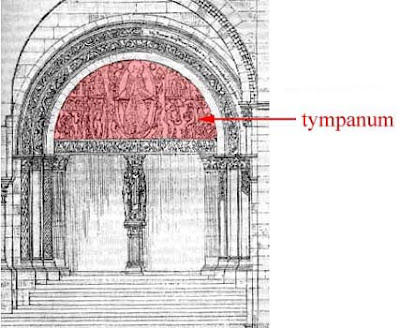 Glossary of Medieval Art and Architecture

tympanum : (plural, tympana): The basically semicircular area enclosed by the arch above the lintel of an arched entranceway. This area is often decorated with sculpture in the Romanesque and Gothic periods.

www.pitt.edu/~medart/menuglossary/tympanum.htm‎
tympanum : (plural, tympana): The basically semicircular area enclosed by the arch above the lintel of an arched entranceway. This area is often decorated with ...


More images found on an excellent blog: architectonice
"This is a blog specifically for Gothic and Neo-Gothic architecture."
Many fine examples: http://www.tumblr.com/tagged/gothic-architecture
Heavy studded door and arched leaded windows (below) 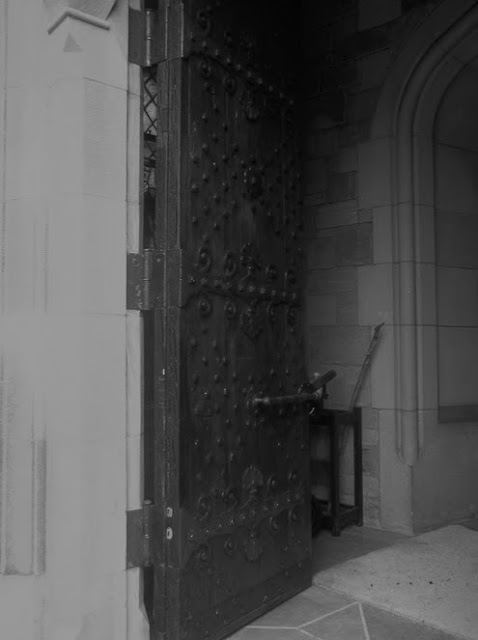 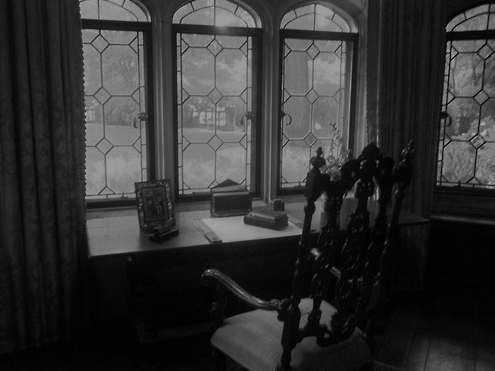 Published on Jun 24, 2013
When Glen and Gerry bought property in Northern California, they wanted first to live on the land to determine the best place to site their home. They found a company that makes tent cabins and erected three. They're not of the camping variety, but more semi-permanent fabric shelters sold by Sweetwater Bungalows.

The living/dining room tent was an A La Carte option where they paid $5200 for a DIY setup: this includes the shell and rain fly and eave and awning system. The couple had to find their own lumber for framing the 14 by 20 foot room. They cut holes in the fabric to fit french doors and the salvaged windows they'd found.

The bedroom and guest bedroom tents are smaller (12 x 14), but large enough to fit standard beds and completely floored with plywood. These kits come complete with frame, windows and door pricing at $6100, not including the platforms which the customer builds themselves with plans supplied by Sweetwater Bungalows.

The couple converted an old shed (left on the property by the previous owner) into a plywood clad bathroom, complete with composting toilet. The showers are outdoors on the decks.

For the kitchen, they constructed an open air lean-to outfitted with propane refrigerator, gas barbecue (with one burner and stove) and a corrugated metal roof.

The space was built to be temporary, but several years have gone by and they've yet to break ground on their home (though they've seen fruit from the olive trees they personally planted and now have a line of organic olive oil).

The DutchTub: a low-tech jacuzzi