Vertical Wall Gardening: "Grow up" in a small garden 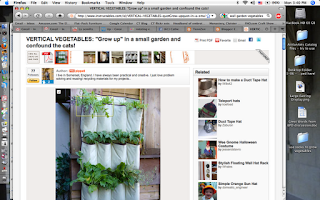 
''How to solve a problem like cats digging and toileting in the vegetable patch'''''', and growing veg in a very small garden. I needed a solution and the answer occurred to me after watching The CheIsea Flower Show on TV and seeing walls of flowers and herbs. The only thing I had to hand was a hanging pocket shoe store and I decided to use it to grow my plants in. I have included the dates I took the photographs to give readers an idea how quickly the veg grew.

Remove these ads by Signing Up

i
- Hanging pocket shoe organiser /store. (comment: buy at the Dollar Store + put plastic cups in them!)
- Pole and attachments ( curtain pole or pipe fittings, screws).
- Strong metal saucepan or utensil hanging hooks
- Compost of a good quality moisture holding type.
- Selection of plants or seeds... e.g. mixed leaf salad, herbs,sorrel, peas, mini tomatoes.
- Piece of wood 2"x2" as long as the width of the pocket store to keep the base of pockets away from the wall.
- Trough planter to catch drips.

WindowFarms.org ~ Garden in your window year-round

Britta Riley: A garden in my apartment 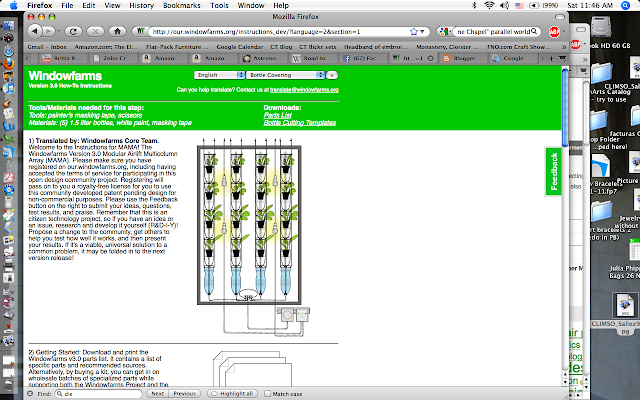 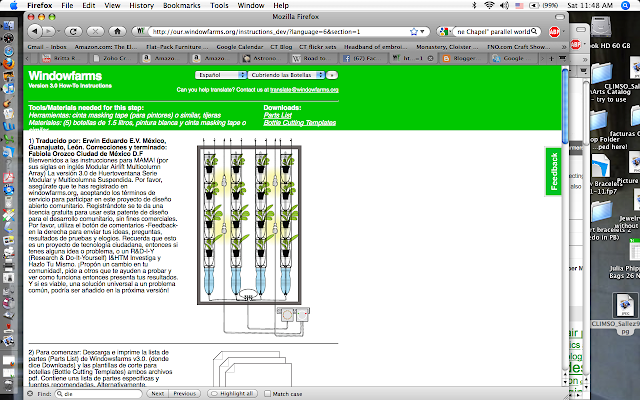 Window farm instructions in Spanish. Surely there is a way to do this without electricity, using gravity and feeding from the top? We grew plants in windows for years and although I know the constant stream of nutrients and LED lights works for low-light situations, maybe there's a way to use this on walls or outside windows.


Type text or a website address or translate a document.
Cancel

Wired meets the woman behind Sugru

Comments 3
This article was taken from the June issue of Wired magazine. Be the first to read Wired's articles in print before they're posted online, and get your hands on loads of additional content by subscribing online

Broken bike seat? Cracked cups? Don’t bin them -- Jane ní Dhulchaointigh wants you to hack them better, and she’s invented a product to help.
Sugru is a Play-Doh-like substance with waterproof, adhesive and heat-resistant qualities, and it sets at room temperature. Launched last December, all 3,000 packets rapidly sold out -- so now production is at ten times that scale. Ní Dhulchaointigh, 31, had the idea while she was at the Royal College of Art in 2003.
“I was making things with silicone sealants and sawdust, and started using the leftovers around the house,” she says at her east London base. “I modified a knife handle to make it more comfortable. My boyfriend said, 'Imagine if everyone could do that -- like with stiff jam-jar lids.' It was a great idea.” But it took seven years, two experts and the materials department at Queen Mary, University of London, to create a silicone that would be sticky but would also set rock hard without heating.

The result is a substance officially called Formerol. Each pack includes hack suggestions, though ní Dhulchaointigh has seen some original uses: "Someone sculpted a pair of hands coming out of their bathroom sink to hold the soap." This enthusiasm, she says, is down to the growth of user-generated content online. "If digital stuff can be manipulated then people are going to expect it from physical products as well."

Want to learn how to hack things better? We can tell you how.

How to 'hack things better'

Leave a comment
Sugru is a new material for "hacking things better".
This do-all putty was developed by an RCA student who wanted to improve her possessions instead of buying new ones. From leaky trainers to hard-on-the-hands tin openers, there's little that it can’t "repair with gusto", according to the site. But how does it work? Well, it’s a flexible substance that turns into tough, flexible silicone when left overnight. It’s also heat resistant, self-adhesive and dishwasher proof.
See sugru.com and the video below for inspiration.

Getting started with SUGRU: http://www.youtube.com/watch?v=tzS3DkQdG3Y&feature=related