The Sanitation Marketing Pilot Project carried out by IDE Cambodias WATSAN team is designed with the overall objective of creating rural household demand for sanitation, and linking this demand to local supply chains that have been educated, trained and supported to deliver sustainable, low-cost latrines. The end result will be a continually developing and thriving private marketplace that satisfactorily addresses the need for rural sanitation.
Category:

4 min - Mar 24, 2011 - Uploaded by benguineamin
The design is for a combined shower and dry latrine which contains a ... of a drip irrigation system which uses water run-off from the ... 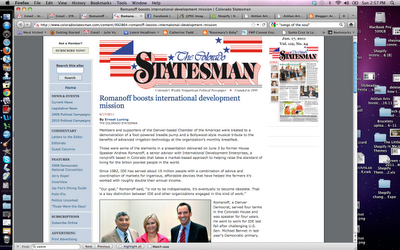 “You and I want to live in a world where entrepreneurs around the planet can develop new means of sustaining their quality of life, not a world in which rich nations continually treat poor nations as beneficiaries or victims of their generosity or largesse,” he concluded. “This is, I think, a more hopeful way to approach international development, and it is what IDE is all about.”

Members and supporters of the Denver-based Chamber of the Americas were treated to a demonstration of a foot-powered treadle pump and a Bollywood-style musical tribute to the benefits of advanced irrigation technology at the organization’s monthly breakfast.

Those were some of the elements in a presentation delivered on June 3 by former House Speaker Andrew Romanoff, a senior advisor with International Development Enterprises, a nonprofit based in Colorado that takes a market-based approach to helping raise the standard of living for the billion poorest people in the world.

Since 1982, IDE has served about 19 million people with a combination of advice and coordination of markets for ingenious, affordable devices that have helped the farmers it’s worked with roughly double their annual income.

“Our goal,” Romanoff said, “is not to be indispensable, it’s eventually to become obsolete. That is a key distinction between IDE and other organizations engaged in this kind of work.”
Chamber of the Americas president Gil Cisneros, Canadian agricultural consul Kim O’Neill and former House Speaker Andrew Romanoff talk international development at a breakfast meeting at a downtown Denver hotel on June 3 that featured a Romanoff presentation on helping the world’s poorest people.

“Our goal,” Romanoff said, “is not to be indispensable, it’s eventually to become obsolete. That is a key distinction between IDE and other organizations engaged in this kind of work.”
Photo by Ernest Luning/The Colorado Statesman

Romanoff, a Denver Democrat, served four terms in the Colorado House and was speaker for four years. He went to work for IDE last fall after challenging U.S. Sen. Michael Bennet in last year’s Democratic primary.

The organization — founded nearly 30 years ago in Colorado by Paul Polak with headquarters in Lakewood — is different from other international aid groups because it mostly works with farmers and the rural poor, a population other groups ignore.

Most of the world’s poor are subsistence farmers, Romanoff told the group, and 75 percent of poorest people — roughly one seventh of the world’s population, who subsist on about $1 a day — don’t live in cities. “But if you add up all the official development aid, the assistance wealthy nations sometimes provide to our poorer neighbors, it turns out only 4 percent of that aid is aimed at agriculture,” he said. “There’s a real gap, in other words, between the way most of the poorest people in the world make their living and the way most of that assistance is channeled.”

That’s where IDE does its work, he said. “We help farming families increase their income and climb out of poverty.”

The organization’s employees, based primarily in sub-Saharan Africa, South Asia and Central America, begin by interviewing local subsistence farmers about what they grow, how they water their crops, and the details of local markets.

“The answers these farmers give drive the advice we provide around crop selection and farming methods, around the irrigation technology we design, and the market access we help to create,” Romanoff said. The group works with local micro-lending institutions to enable farmers to buy devices designed to increase productivity and help farmers start to get ahead.

A steady supply of water is crucial, so that farmers don’t have to rely on rainfall or lugging water in buckets, Romanoff said, introducing the treadle pump, IDE’s most well known device, a contraption that looks something like a low-tech Stairmaster. It’s “easy to use, easy to build and repair, and easy to repair,” Romanoff said, and is “capable of generating a huge return on investment — it can double or triple your growing season as a farmer.” Operating the pump is a vigorous proposition, as a volunteer demonstrated, but when it’s harnessed with drip irrigation and water storage systems, it can increase crop yield dramatically.

In keeping with IDE’s mission to help turn the world’s poor into entrepreneurs, rather than simply handing over money, the organization helps establish local manufacturing and distribution operations for its devices. To spread the word, Romanoff said, some local farmers in India and Bangladesh have even produced advertising campaigns — “frankly,” he said, “much more creative than anything Madison Avenue could come up with” — that “literally to sing the praises of irrigation technology.”

He played a short musical number that is displayed on the back of movie trucks that visit clearings in villages as a means of reaching farmers in remote areas. With plenty of singing and dancing, the brief story unfolds: “Here’s a farmer trying very hard to impress a beautiful woman and win her hand in marriage, and he wasn’t having much luck, until he invested in irrigation technology,” Romanoff said with a smile.

Another video displayed a testimonial from Anita, an IDE customer in Zambia who took her income from a dollar a day to two dollars a day.

“I know that doesn’t sound like much in the U.S., where an extra dollar won’t even buy you a cup of coffee,” Romanoff said. “But in a country like Zambia, an extra dollar of income could mean the difference between bare survival and sending a child to school, or taking her to a doctor or nurse when she gets sick.”

In Anita’s case, that extra dollar allowed her and her family to afford a new house, built out of brick instead of her neighbors’ mud houses. She and her husband are saving up to buy a car, which will allow them to more easily get crops to market, Romanoff said.

Noting he was speaking before a business group — Romanoff delivers his presentation regularly before Rotary and other gatherings, complete with traveling treadle pump — he made a pitch to understand IDE’s work in business terms.

“This customer-driven focus is a hallmark not just of our success but of a growing movement in international development,” he said. One of the most creative IDE inventions — a combination shower, latrine, irrigation device distributed in Cambodia — came in direct response to customer needs, he added.

“You and I want to live in a world where entrepreneurs around the planet can develop new means of sustaining their quality of life, not a world in which rich nations continually treat poor nations as beneficiaries or victims of their generosity or largesse,” he concluded. “This is, I think, a more hopeful way to approach international development, and it is what IDE is all about.”

Chamber of the Americas president Gil Cisneros vowed to help spread the word about IDE during his travels throughout Central and South America. He also announced that former state Rep. Morgan Smith, who also served as Colorado Agriculture commissioner, will headline the Chamber’s next monthly breakfast with a presentation on violence at the Mexican border. That talk will be at 8 a.m. June 28 at the Crowne Plaza hotel, 1450 Glenarm St., in downtown Denver.

IDE is sponsoring an exhibit that opens next month called “Design for the Other 90 Percent,” featuring innovations that tackle challenges in the developing world. The exhibition, from the Smithsonian Cooper-Hewitt Design Museum, will be on display starting July 8 at RedLine gallery, 2350 Arapahoe St., in Denver.