Here is a brilliant TED talk on corn as charcoal substitute:

TEDTalks is a daily video podcast of the best talks and performances from the TED Conference, where the world's leading thinkers and doers are invited to give the talk of their lives in 18 minutes -- including speakers such as Jill Bolte Taylor, Sir Ken Robinson, Hans Rosling, Al Gore and Arthur Benjamin. TED stands for Technology, Entertainment, and Design, and TEDTalks cover these topics as well as science, business, politics and the arts. Watch the Top 10 TEDTalks on TED.com, at
http://www.ted.com/index.php/talks/top10
Category: 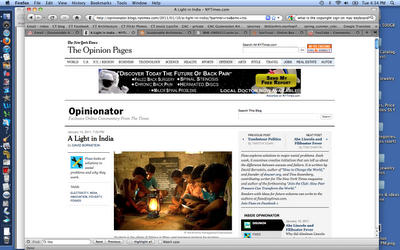 6.
Fixes: A Light in India
12 hours ago
This is why I'm writing today about a small but fast-growing off-grid electricity company based in Bihar called Husk Power Systems. It has created a system ...
New York Times (blog) - 6 related articles
http://opinionator.blogs.nytimes.com/2011/01/10/a-light-in-india/?partner=rss&emc=rss

One Man, One Hammer, A 64 Square Foot Solar Home 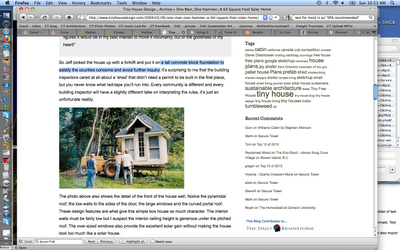 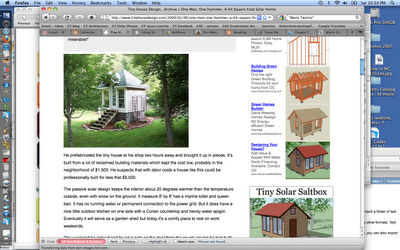 One Man, One Hammer, A 64 Square Foot Solar Home
Story by Michael Janzen on February 6, 2009 and filed in Projects
12 Comments

Jeff has been living in this tiny house about 100 days out of the year, with his wife and dog, while building their larger 1,400 square foot home. Their property, which they bought in 2003, is in the western mountains of North Carolina. Jeff figured that they could camp out while building the larger house but soon discovered that their new property was in a temperate rain forest, which meant regular rain and very uncomfortable camping. This tiny house was born out of the desire to stay dry and warm.

“Every time I went up there to work it rained. Maybe not for long, but it seemed like every day! Tents were getting soaked and had to be dried out during the week. It was miserable!”

He prefabricated the tiny house at his shop two hours away and brought it up in pieces. It’s built from a lot of reclaimed building materials which kept the cost low, probably in the neighborhood of $1,500. He suspects that with labor costs a house like this could be professionally built for less that $9,500.

The passive solar design keeps the interior about 20 degrees warmer than the temperature outside, even with snow on the ground. It measure 8′ by 8′ has a marine toilet and queen bed. It has no running water or permanent connection to the power grid. But it does have a nice little outdoor kitchen on one side with a Corian countertop and handy water spigot. Eventually it will serve as a garden shed but today it’s a comfy place to rest on work weekends.

One weekend he arrived and found a note on the door from the county saying he had built the shed in a floodplain. As a former building inspector himself Jeff had figured that the tiny house wouldn’t attract attention because it didn’t fall into the definition of a habitable room, which in his neck of the woods is 70 square feet. He was partially right, the location of the house in the flood plain is what raised eyebrows. Luckily there was no bed or TV in the room either when the inspector visited. This seems like a good lesson to learn, the more a tiny house looks like a garden shed the less attention it attracts. Hide in plain sight in other words.

“I was a building inspector for a while and figured that if I built it under their definition of a habitable room which is 70 sq. ft., I would be OK. The answer, Yes and No. No it wasn’t considered habitable, mainly because when the “Revenuers” found it, it was empty (unlike now with a queen size bed and TV). Although it was in their floodplain. I figured it would be in my best interest to move it voluntarily, out of the goodness of my heart!”

So Jeff picked the house up with a forklift and put it on a tall concrete block foundation to satisfy the counties concerns and avoid further inquiry. It’s surprising to me that the building inspectors cared at all about a ‘shed’ that didn’t need a permit to be built in the first place, but you never know what red-tape you’ll run into. Every community is different and every building inspector will have a slightly different take on interpreting the rules, it’s just an unfortunate reality.

The photo above also shows the detail of the front of the house well. Notice the pyramidal roof, the low walls to the sides of the door, the large windows and the curved portal roof. These design features are what give this simple box house so much character. The interior walls must be fairly low but I suspect the interior ceiling height is generous under the pitched roof. The over-sized windows also provide the excellent solar gain without making the house look too much like a solar house.

Outside they’ve planted a garden for fresh veggies on their weekend work trips. Jeff has also begun to use several different passive and active solar techniques on the larger home and tiny house. Eventually he wants to have a photovoltaic solar array and a wind turbine for electricity.

The biggest passive solar recommendation he has for those of us interested in building our own solar tiny houses is to make it as air tight as possible. He went to great lengths to make both houses air tight and it makes all the difference.

“The main thing that anyone can do is to stop air infiltration. All the “Green” bells and whistles don’t mean a thing if you can’t keep the conditioned air in the building. I went to great lengths on both the “shanty” and the main house. A small 6″ quartz heater will overheat the Building when it is in the 20′s outside.”

Below is the river (and dog) you’ll find in their backyard. The nearby river is the reason this tiny house, and larger house, are built so high in the air. Photo credit to Jeff & family. Be sure to check out his photos on flickr. This is a wonderful tiny house design success story! Thanks for all the great information Jeff!