Interesting links for eco-architecture and eco-living

A group of interesting videos and links (finish and organize better later on):

Bamboo Buildings
Grow it, build with it.


---
•  This is an interesting concept for buildings that will generate energy (but I would only use "organic" materials):

2.  Use Pavers to create kitchen garden: See more below: "Students who need additional drawings of Thorncrown Chapel by E. Fay Jones for models and other projects may contact the Arkansas Architectural Archives at the University of Arkansas through the web pages above." http://www.thorncrown.com/architecture.html

Thorncrown Chapel was designed by world renowned architect E. Fay Jones. Fay was born in Pine Bluff, Arkansas in 1921. He studied at the University of Arkansas, Rice University, the University of Oklahoma, and finally under his mentor Frank Lloyd Wright at the Taliesin Fellowship.
Jones’ awards include the 1981 American Institute of Architects National Honor Award for Thorncrown Chapel and the AIA Gold Medal (1990). Thorncrown was listed fourth on the AIA’s top ten buildings of the 20th century. When alive, Mr. Jones was recognized as one of the top ten living architects of the 20th century.

The chapel rises 48 feet into the sky with over 6,000 square feet of glass and 425 windows. Its dimensions are 24 feet by 60 feet. The chapel is made with all organic materials to fit its natural setting. The only steel in the structure forms a diamond shaped pattern in its wooden trusses. The building has a native flagstone floor surrounded with a rock wall which gives the feeling that the chapel is part of its Ozark hillside.

In order to preserve Thorncrown’s natural setting, Fay decided that no structural element could be larger than what two men could carry through the woods. The building materials are primarily pressure treated pine 2x4s, 2x6s, and 2x12s. The larger elements of the building such as the trusses were assembled on the floor and raised into place.

Light, shadows, and reflections play a major role in Thorncrown’s ambience. Because of the chapel’s elaborate trusses and the surrounding trees, constantly changing patterns of light and shadows appear during the day. At night reflections of the crosses in the lights appear to surround the entire building. Consequently, Thorncrown never looks quite the same. Its appearance changes during each hour of the day and during the different seasons of the year.

For those researching Thorncrown Chapel or Fay Jones, we recommend the following resources:

Books:
"Fay Jones" by Robert Ivy Jr. AIA Press
"Outside the Pale: The Architecture of Fay Jones" by Dept. of Arkansas Heritage

For pictures of Thorncrown Chapel while under construction and detailed drawings:

For information about Fay Jones and Thorncrown Chapel:
Fay Jones Collection at the Arkansas Architectural Archives

Students who need additional drawings of Thorncrown Chapel for models and other projects may contact the Arkansas Architectural Archives at the University of Arkansas through the web pages above.

How to build Thorncrown Chapel


E. Fay Jones - Outside the Pale


This is such a fascinating structure... so similar to a covered bridge yet with views open to elements and surrounded by the natural beauty all around.
That has to be part of the magical mystery of this place. The geometry of this structure reminds me of something so close to home, like a bee-hive buzzing, but silent and contained. What is it about this particular geometric shape and form? It seems like "the essence of life." What makes it "sacred" in all aspects of it's creation and construction? For it surely is...﻿

Fay Jones says he was a "cathedral builder born 500 years too late." I agree! His incredible inspiration comes from Sainte Chapelle, one of the most beautiful small cathedrals in Paris that is overwhelming in it's simplicity and beauty, as is Jone's architectural work. "Transcendental Feeling and Mystery" accurately describes his work.﻿

At 48-ft. tall with 6,000 sq. ft. of glass and a flagstone floor, the Thorncrown Chapel was “an acoustical nightmare.”

At 48-ft. tall with 6,000 sq. ft. of glass and a flagstone floor, the Thorncrown Chapel was “an acoustical nightmare.”

Thorncrown Chapel, in Eureka Springs, Ark., comes in fourth on the American Institute of Architecture’s top designs of the 20th century. It has 425 windows and more than 6,000 square feet of glass. Image courtesy of Thorncrown Chapel.

Important solution for sound in this chapel: read more at
http://www.designerpub.com/projects/thorncrown-chapel-receives-a-sound-renovation

excerpt: "Bose brought the Tulsa, Okla., office of dealer and integrator FBP Systems onto the project. “This a challenging project in many ways, and not just acoustically,” says Mark Labouff, national sales manager for FBP Systems. “This is also an architecturally and historically significant building, so a lot of care had to be taken in installing a sound system. The space’s architect had designed millwork to hide speakers when the building was first built.

In order to maintain the historical integrity of the building, we needed a speaker system that would fit inside the original millwork, and the MA12EX modules were the right size; they are actually hidden behind grille cloth that spans the front of the millwork. In addition, because of where the millwork is located, the speakers had to be placed behind the pulpit microphones. That creates an enormous potential for feedback. But with the MA12EX loudspeakers, it was no problem. And the slim column enclosure blends with almost any décor, and that addressed the aesthetics. The MA12EX loudspeakers are resistant to feedback, and have such tight pattern control that I can’t imagine any other product could work in that space.”

Reed realized he had finally found the solution that had eluded the chapel for so long. “When I first heard the system, I could hardly believe my ears. I could understand every word, even at the back of an empty chapel. We were thrilled, but the best testimony comes from the tens of thousands of people who have listened to the talks and sermons we give at Thorncrown—not one complaint about not being able to hear. That says it all.”

This is what I want to build first! We could even use bamboo here in Central America. Now to find plans...(Note: found more info at: http://www.thorncrown.com/architecture.html)

My E. Fay Jones Guide Book is now available at blurb.com. Here is a direct link: www.blurb.com/user/store/cw_stevens Thanks!

This blog entry has the some of the most detailed and inspiring photos and information I've found yet. Gracias, amiga!

Our group visited one of these Monday which was the Mildred B. Cooper’s Chapel in Bella Vista and que bella vista it truly is! 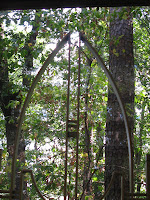 I'd say that Mr. Jones did indeed accomplish what he set out to do as he did 'touch' me with the beauty of his design of the Chapel nestled in the woods. In fact the structure looks like it has always been here.

Fay's design rules included leaving the environment undisturbed as much as possible, a principle of ‘organic architecture.’ No structural element could be larger than what two men could carry through the woods. Building materials included pressure treated pine 2x4s, 2x6s, and 2x12 s mostly. The trusses were assembled on the floor and raised into place. 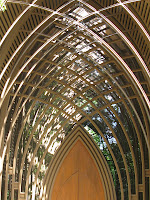 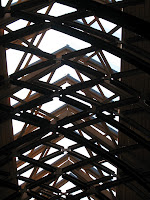 These trusses and the surrounding trees make the light and shadows play inside and outside the chapel. The resulting patterns change not only with the time of day but also by the season. Therefore, the structure never looks quite the same. 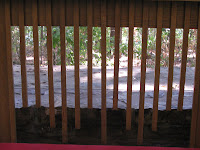 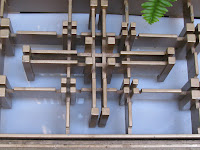 Fay's internship with the great architect Frank Lloyd Wright and his influence is apparent in Fay's design elements in the building’s use of natural elements and the linear features even down to the embellishments on the chapel's floor lights. 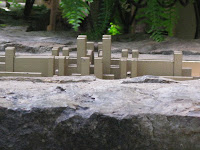 This same design is repeated in the path lights leading to the chapel.

The Cooper Family's desire was to create a spiritual setting. Mr. Fay certainly accomplished their desires. What a legacy he has left making Bella Vista even more bella! 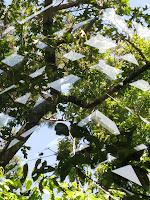 Remember to use self-cleaning greenhouse glass, with openings to let in breeze and air. From FB.

Yesterday
I'd like this to be my outdoor kitchen, too!
Feel part of Nature while cooking - love this glass kitchen. — with Tia Rita Haus and 49 others.