The Palace of Versailles, or simply Versailles, is a royal château in Versailles, in France's Île-de-France region. In French, it is known as the Château de Versailles. When the château was built, Versailles was a country village; today, however, it is a suburb of Paris, some twenty kilometers southwest of the French capital. From 1682, when Louis XIV moved from Paris, until the royal family was forced to return to the capital in 1789, the court of Versailles was the centre of political power in France. Versailles is therefore famous not only as a building, but as a symbol of the system of absolute monarchy of the Ancien Régime. (more) 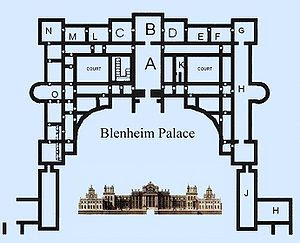 Enfilade (architecture)
From Wikipedia, the free encyclopedia
Jump to: navigation, search
Blenheim Palace, Oxfordshire: an enfilade of 9 state rooms runs the length of the palace (marked "N" to "G" at the top of the figure). Note alignment of doors between rooms.
For the military term, see Enfilade.

An enfilade, in architecture, is a suite of rooms formally aligned with each other. This was a common feature in grand European architecture from the Baroque period onwards, although there are earlier examples, such as the Vatican stanze. The doors entering each room are aligned with the doors of the connecting rooms along a single axis, providing a vista through the entire suite of rooms. The enfilade can be used as a processional route, and is a common arrangement in museums and art galleries, as it facilitates the movement of large numbers of people through a building.

In a Baroque palace, access down an enfilade suite of state rooms was typically restricted by the rank or degree of intimacy of the visitor. The first rooms were more public, and at the end was usually the bedroom, sometimes with an intimate cabinet or boudoir beyond. Baroque protocol dictated that visitors of lower rank than their host would be escorted by servants down the enfilade to the furthest room their status allowed. If the visitor was of equal or higher access, the host would himself advance down the enfilade to meet his guest, before taking him back. (more)
Posted by Catherine Todd at 12/14/2008 09:17:00 AM

Wonderful post! Blenheim Palace is my all time favorite stately home in England. The library there is awe inspiring.

I recently had the opportunity to attend a Christmas party at the White House, and the rear of the public rooms of the White House is arranged this way - enfilade - with the red room, blue room, green room all connected directly to each other, flanked on either side by the East Room and the State Dining Room. I did a post on my evening at the White House, if you are interested!

You wrote: "I did a post on my evening at the White House, if you are interested!"

Of course, I would be interested in hearing about it. Thanks for commenting.