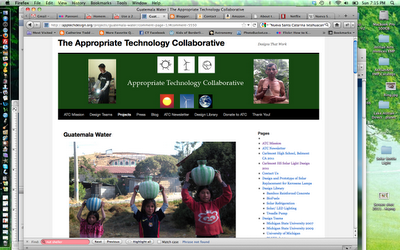 Women Still Carry the Burden When Water is Scarce

From Wikipedia, the free encyclopedia: http://en.wikipedia.org/wiki/Nueva_Santa_Catarina_Ixtahuacan

Nueva Santa Catarina Ixtahuacan is a village in the northwest corner of the Sololá department of Guatemala, about 169 km (105 miles) west of Guatemala City. The village (not be confused with Santa Catarina Ixtahuacan, see below) is along both Guatemalan Highway 3 and Central American Highway CA-1. The village has a population of around 4000 people[1] and is approximately 3048 meters (10,000 feet) above sea-level. The village is known for its Mayan culture, including traditional Mayan weavings created with a back-strap loom.

Nueva Santa Catarina Ixtahuacan is a relatively young village. The village was formed in 1998, when 60%[2] of the village of Santa Catarina Ixtahuacan was destroyed by large landslides during Hurricane Mitch and residents decided to establish a new village on higher ground.[3] Although the decision to move was made by the community, the federal government provided some assistance and infrastructure funding, including for houses and paved roads.[3]

Nueva Santa Catarina Ixtahuacan has attracted attention from numerous international non-profits in recent years. The Rutgers University branch of Engineers Without Borders is currently (2011) re-designing and repairing the village's water supply system, with scheduled completion by summer 2011.[4] Additionally, the Ann Arbor-based non-profit Appropriate Technology Collaborative has been leading student project teams from Rutgers, the University of Michigan, and Michigan State University to work on energy, water, and health issues in the village since 2007.[5] All projects are available online at no cost.