A deck prism is a prism inserted into the deck of a ship which provides light down below. 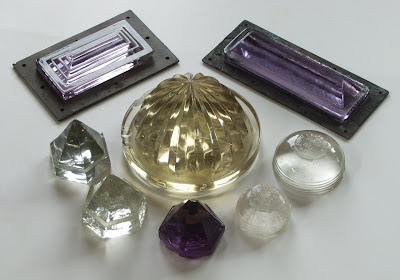 Group of original deck prisms. Some from the 19th century.

Purchase one (also comes with a lighted base) from one of my favorite stores: Edmund Scientific www.scientificsonline.com 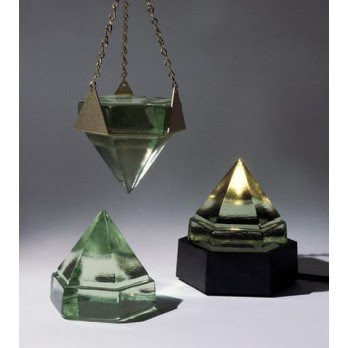 For centuries, sailing ships used deck prisms to provide a safe source of natural sunlight to illuminate areas below decks. Before electricity, light below a vessel's deck was provided by candles, oil and kerosene lamps - all dangerous aboard a wooden ship. The deck prism was a clever solution: laid flush into the deck, the glass prism refracted and dispersed natural light into the space below from a small deck opening without weakening the planks or becoming a fire hazard.

In normal usage, the prism hangs below the ceiling and disperses the light sideways; the top is flat and installed flush with the deck, becoming part of the deck. A plain flat glass would just form a single bright spot below-- not very useful general illumination-- hence the prismatic shape.

On colliers (coal ships), prisms were also used to keep check on the cargo hold; light from a fire would be collected by the prism and be made visible on the deck even in daylight.

The names "deck light", "dead light" or "deadlight" are sometimes used, though the latter is uncommon as a reference to prisms, as more often refers to non-opening plain-glass panels.